We probably did not foresee this day to come, but now it´s here. Kentucky Fried Chicken, also known as KFC, has released a chicken box that can charge your phone. You don’t believe us? Keep on reading.

Last summer, KFC India released a box that, thanks to a built-in power bank and USB cables for charging, can charge your phone AND hold your fried chicken at the same time. Isn’t that crazy?

The food chain calls this new invention “Watt a Box” and it works for both iPhone and Android smartphones. So far, the Box has been produced only in limited edition and has been given out to the winners of a Facebook competition in Delhi and Mumbai.

The thought behind this idea is to quickly rescue KFC’s customers when their phone battery is beginning to die. We all know that feeling when our phone is running out of battery and we have nowhere to charge it. That’s when this new incredible box is supposed to “save our lives”, and ease our hunger of course. 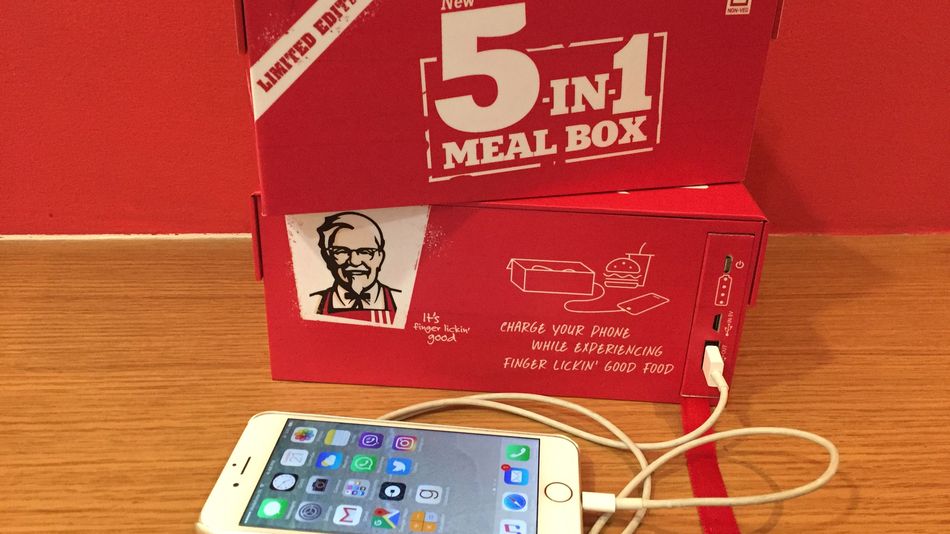 “Each one of us spends a considerable amount of time on smartphones daily. And the phone battery going dead is almost like a nightmare! No longer is that the case, with the Watt-a-Box around,” says KFC India’s Chief Marketing Officer Lluis Ruiz Ribot.

India is one of the biggest markets for smartphones and its citizens are constantly connected and working on their phones. According to a study made in July 2015, Indian citizens spend approximately 169 minutes a day on their phones.

But every new invention has its downsides. According to a test made on the invention, an iPhone 5s only charged 17% of its battery after being connected for 30 minutes to the “Watt a Box”. Not really as good as one could hope probably. And what happens when the battery of the box runs out of its own battery? That’s it apparently!

Either you bring your own charger and find somewhere to plug it in, or you take a chance with this Box… 17% extra battery might save you, for the time being.

If you want to know more about this invention take a look at this video:

How Often Should You Change Your Packaging Design?

Is Milk the Future of Packaging?

Lululemon: A Story of Yoga, Sweat and Sustainability
Scroll to top